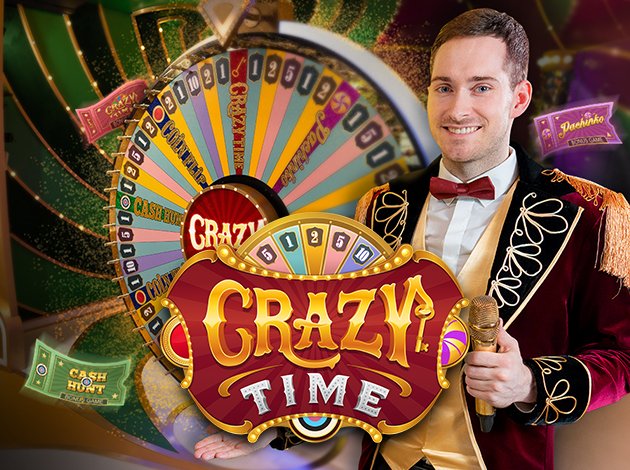 Evolution Gaming puts an online game show spin on the popular Dream Catcher concept to bring about Crazy Time! Like Dream Catcher, Crazy Time has a live dealer spin the large money wheel, but it also brings the possibility to add multipliers through the Top Slot above the wheel. You also get the chance to play four exciting bonus games – Cash Hunt, Pachinko, Coin Flip and Crazy Time. Playing the game is easy enough. You simply need to place bets on numbers (1, 2, 5 or 10) and/or the bonus games. Two of the four bonus games allow players to win different multipliers, bringing even more of a one-of-a-kind experience!

As mentioned earlier, Crazy Time has a selection of 4 exciting bonus games – Cash Hunt, Pachinko, Coin Flip and Crazy Time. You can take part in these games depending on the Bonus segment the wheel stops at. All players can observe the bonus games, but only those who have placed a bet on the corresponding bet spot can participate.

Cash Hunt: This is a shooting gallery featuring a large screen with 108 random multipliers. The multipliers are covered by random symbols and shuffled before the player positions their aim when the countdown timer starts. This is when you prepare and aim your cannon at the spot where you think the highest multiplier is! The cannon is fired when the countdown is over, which is when all covered spots are revealed and you see what multiplier you have won. Each player selects their own target, meaning they will win different multipliers!

Coin Flip: Let the coin decide! This bonus round involves the flip of a red- and blue-sided coin. Before the coin is actually flipped the game first randomly assigns two multipliers, one for each side of the coin, and displays them on a TV screen.

Crazy Time: What lies behind the red door? Only the Crazy Time bonus game, where you will find a virtual world housing a giant 64-segment wheel! This wheel features 3 flappers and nothing but multipliers! If a multiplier was won in the Top Slot, all multipliers in the Crazy Time wheel are multiplied by it. Players need to select a colour flapper (blue, green or yellow) before the presenter pushes the big red button and starts the wheel. If a flapper points to a “Double” or “Triple” value on the wheel, all multipliers are doubled or tripled and the wheel spins again. Only players that choose this flapper can take part in the round. The wheel can be respun until all multipliers reach a maximum value of 20,000x.

Evolution Gaming has built further on the concepts introduced by the previous likes of Dream Catcher and Monopoly Live to bring about something truly special and, well, a bit crazy! The result is a game that is fun to both watch and play, thanks to its colourful studio and four exciting bonus games. It is also very easy to pick up and start playing, and the live chat makes it feel even more interactive and entertaining. Give Crazy Time a go at Videoslots Casino today!