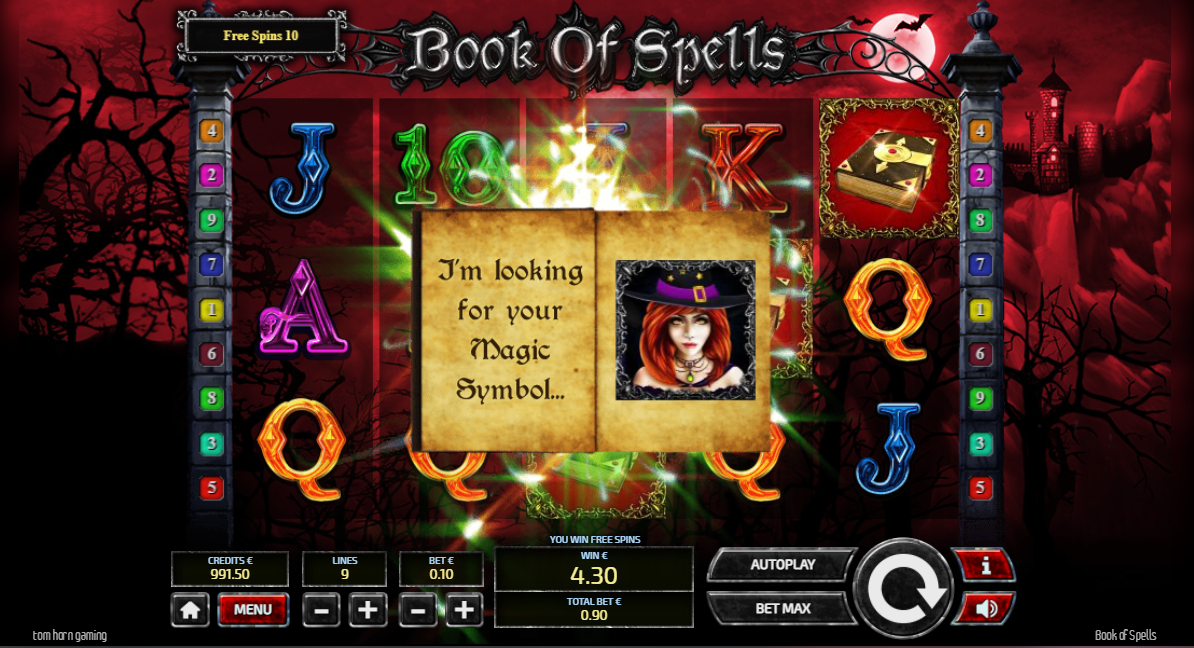 In the land of witchcraft, potions, and magic, the Book of Spells will turn its own pages to help players win. Book of Spells is a Wild Symbol and substitutes for all other symbols spinning around 5 reels to increase the number of winning combinations formed on the 9 win lines of the game. When 3 or more Books of Spells are scattered on the reels, they trigger 10 re-triggerable Free Spins with a special expanding symbol for bigger wins.

The Book of Spells slot has a magical theme full of wizards, potions and spells. The reels are set in front of a stone entryway which leads to the Great Wizard’s castle. On either side of the reels are two flaming torches which are animated so they flicker throughout the game. The symbols all represent the theme with castles, books, potions and an owl. You also have your standard playing card symbols but these have been jazzed up to match the theme also. If you enjoyed this theme then take a look at the Book of Oz online slot.

Unlike normal books that simply open and close when you want them to, this particular tome has to be coaxed into willingly offering up its wonders, and would you believe that money is the only thing it responds to. I know, we were shocked too.

The Book of Spells will allow you to alter the 9 paylines as you see fit, but they won’t let you bet below 0.05 or over 2 coins, which means you’ll always have to play with either a small stake of 0.45 or a large one of 18. Although the book may frown upon caution, you can play with whatever amount you feel is best for you – you can even play the demo if you’d prefer. You won’t get any real wins and so no money will be gifted to you, but the choice is yours.

Selecting the Max Bet button won’t just change the wager amount, it’ll also begin the spins for you. In a similar fashion that’s what the Autoplay does, only it doesn’t do anything to your cashflow, only helping to make playing more manageable; fingers begin aching when they’re always in use. The wickedness of slot machines come to haunt us.

The book comes into a life of its own when it triggers the free spins, of which there are 10 in total. What will happen during this time is that a symbol will be chosen, at random, to become special for the duration of the rounds. Whenever they appear they’ll give you a win, however should they make a winning line they’ll expand onto the reels. This expansion means greater returns for you.

What we really like is the fact that the waves can be triggered during your initial spins, the only thing is that the book won’t reselect a new symbol, you’ll still play with the old. It doesn’t really matter, but it would have been nice to have more options within this mini level.

Aside from that there isn’t much else to trigger or open up, which seems sad for a book that is meant to hold every secret of witches and their covens – not even the lead witch can do more than give you 5,000 credits. That’s all fine and dandy, but shouldn’t she do something else, even be a wild and sub symbols for us? No, okay then, now we’re feeling a little deflated.